At present I have three horses out competing with several youngsters at home soon to start their competitive careers. All my horses other than those owned by other people are home bred and produced some second generation home breds.

Rosie is a second generation home-bred out of Mystic Charm whom I competed as well as her mother, Mystic Flight who competed up to Advanced level. She is by Sambertino who was chosen for his temperament as Mystic Charm could be very tense and nervous.

Rosie is currently competing at Medium and Advanced Medium hoping to start in PSG later this year.

She had a late start to competing not starting in Novice until October 2016 due to having a kissing spine operation at 5 and not really coming right for several years. She has been very successful competing at Regionals at every level from Novice to Advanced Medium. She is a highly strung very sensitive mare and has often found the atmosphere at Regionals a bit too much to cope with. Since getting her used to music and doing 3  Medium level tests, all of which she won on over 71%  she seems more settled so fingers crossed.

Rosie has qualified for the Medium, Medium freestyle and the Advanced Medium at the 2019 Winter Regionals. Results: 2nd in the Medium freestyle and gained a wild card to Nationals but I am not going to take this up, as she is just gaining in confidence and think this may be a step too far too soon. 3rd in Medium but one judge placing her 9th and the other two 2nd led to her not qualifying. 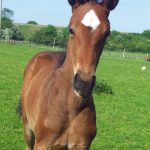 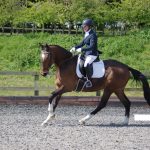 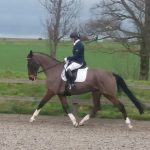 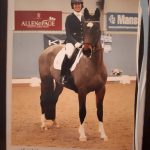 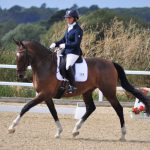 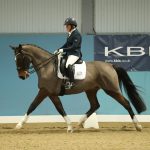 Sparky is out of my mare Little Lady by Showmaker, his full pedigree can be seen here

Sparky is a horse with a super temperament and was kept as a stallion until he was 5. He has had good success at Novice coming 3rd at the Winter regionals 2018 and 7th in the Elementary summer regionals the same year. He has qualified for the Elementary, Elementary freestyle and Medium for the 2019 winter regionals. I won’t enter him in the medium as he had a couple of months off , one as a holiday and then due to my injury another so don’t feel he’ll be ready in time.

Fabulous result Starmaker is now Eastern regional champion at Elementary freestyle with a great score  of 71.92% so is of the Nationals in April. He also came 4th in a large and hot Elementary class with 68.9%

NAF  Five star winter dressage championships. A fab result coming 3rd in a very strong class at Sparky’s first major championship, a few nerves and distractions led to a couple of mistakes but such a superstar. 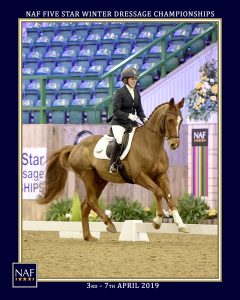 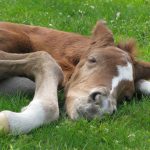 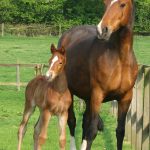 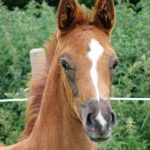 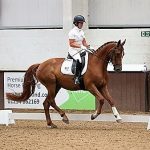 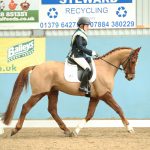 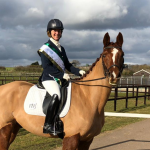 Elliott is out of my mare Justice of Q who I bought as a three year old and trained up to PSG before an injury ended her ridden career. he is by a Welsh pony stallion Daichristu Dynamite.

Sadly Elly had to be put to sleep when foaling. Elliott had a foster mare that I leased which helped him lead a normal foal life. At three he had to have an operation for a retained testicle under GA and after this he went down hill, being very poor and losing all his muscle. it was a long journey but eventually after meeting Donna Blinman a vet and osteopath she diagnosed hindgut issues due to his start in life and then the added pressure on his already delicate digestive system of the GA. It took a couple of years of detoxing and then rebuilding his hindgut health but he eventually started competing in May 2018. He is very talented but also still becomes very stressed in new environments. Thus his scores at Novice vary from 79.29 % to 56.7% in a more scary new place! I am hoping he will become more consistent and have to look back to where he was a year ago when I could hardly keep any canter. He isn’t naughty in the arena he just freezes and goes inside himself and then switches off to my aids and finds it hard to canter in his rigid state.

Elliott is qualified for Novice at the 2019 Winter regionals, we will see how he copes in a bigger environment!
Result, he was fantastic, a long arena walk did the trick to help him stay calm with one judge having him equal first he ended up in 6th place. 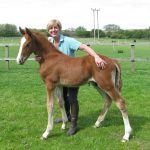 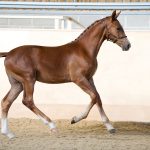 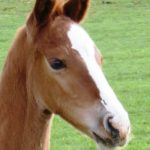 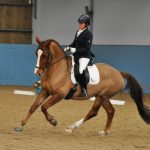 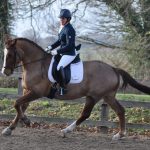 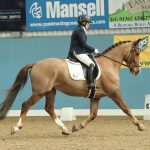 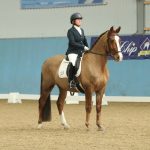 Firefly is out of Mystic Mayfly a mare that I also bred and who I competed to Advanced level and trained most of the Grand Prix movements on. Her full pedigree is here

Firefly was lightly backed when coming four then had some time off during the summer and is now working roughly four days a week including hacking. She is about to start going out to competitions